Circle
A circle is easy to make:


Draw a curve that is "radius" away
from a central point.

All points are the same distance from the center. 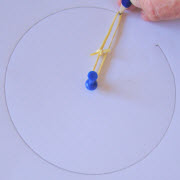 You Can Draw It YourselfPut a pin in a board, put a loop of string around it, and insert a pencil into the loop. Keep the string stretched and draw the circle!

The Radius is the distance from the center to the edge.The Diameter starts at one side of the circle, goes through the center and ends on the other side.

The Circumference is the distance around the edge of the circle.

And here is the really cool thing:

We can say:
Circumference = π × Diameter


Example: You walk around a circle which has a diameter of 100m, how far have you walked?Distance walked = Circumference = π × 100m


Also note that the Diameter is twice the Radius:

And so this is also true:

RememberingThe length of the words may help you remember:

NamesBecause people have studied circles for thousands of years special names have come about.

Nobody wants to say "that line that starts at one side of the circle, goes through the center and ends on the other side" when a word like "Diameter" would do.

So here are the most common special names:

LinesA line that goes from one point to another on the circle's circumference is called a Chord.

If that line passes through the center it is called a Diameter.

A line that "just touches" the circle as it passes by is called a  Tangent.

And a part of the circumference is called an  Arc.

Slices
There are two main "slices" of a circle

The "pizza" slice is called a Sector.

And the slice made by a chord is called a Segment.